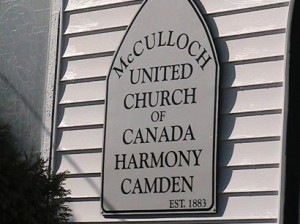 McCulloch United Church (Harmony-Camden Pastoral Charge) is one of several United Churches in the Truro area. Our church is a warm and open cornerstone of a multi-generational community . We have an excellent Choir and Sunday School adding much to our morning worship. McCulloch United Church is generous to the Mission and Service Fund and supports community groups. At the present time, we do not have worship services during the summer months of July and August.

The records state that the church’s presence in Harmony-Camden began in 1839 when Rev. William McCulloch of First Presbyterian Church in Truro began preaching regularly in the area. For many years all services were held in the Harmony schoolhouse and usually under various catechists supplied by the Truro Presbytery. In the summer of 1880, Mr. Rogers came as a missionary to the villages, and before he left in the autumn, plans were made to build a church since the schoolhouse was no longer large enough to hold the congregation.

On September 1, 1880 Mr. and Mrs. Thomas McKim donated the land on which the church now stands. Work, was begun the following summer, and although the building was not yet finished inside, the first communion service was held in it on October 16, 1881. The Rev. William McCulloch officiated at the service with Rev. T. McMillen preaching the sermon from the text “The blood of Jesus Christ, His Son, cleanseth us from all sin”. 1 John 1:7

By 1883 the church was completed inside, and it was officially opened and dedicated on June 2, 1883. The same ministers were present for this service, and Rev. William McCulloch was honored by having the church named the McCulloch Presbyterian Church. Rev. McCulloch remained the minister until 1885, having served in Truro for forty-eight years.

In 1950, the church building was in need of renovation so the ceiling of the sanctuary was lowered. In 1963, the building was raised and a concrete basement was built under it to made room for Christian Education facilities.
In 1978, McCulloch United Church separated from the Coldstream Pastoral Charge to once again become an independent congregation in the presbytery.

A special service was held on June 12, 1983 to commemorate the 100th Anniversary of the church. Folks dressed in costume of the period of 100 years ago.

Stain glass windows donated by individuals over the years have been placed in all of the windows of the sanctuary of the church.

There is a long history of people turning to the church here for spiritual guidance, and this church serves in the larger community in a great variety of ways.
We can be proud McCulloch United Church has become a vibrant congregation encompassing people of all ages and from neighbouring communities. There is a great variety of occupations, interests and talents providing gifts to the community. The people of this church care about the church and care about each other. Families totaling 133 look to this community of believers for support, comfort and spiritual nourishment. Our concern is that we have an aging congregation. There are 67 regular givers.